A Marketing Plan Increases Your Chance of Success

For people and businesses who want to make more money selling products and services locally, a marketing plan increases your chances of success.

A marketing plan is a document that describes exactly how you are going to get more customers to purchase the products and services you’re selling. It’s something you need to succeed.

Many people selling products and services think that a little desire and motivation is all they need to successfully reach their marketing goals. Research indicates that’s not what makes people successful!

What researchers have discovered is that neither desire nor motivation is the driving forces behind success.  While having these characteristics certainly makes it easier to be successful, they aren’t the defining factors.

A Written Plan is the Driving Force

Physically defining how, when and where specific action is taken for the purpose of achieving specific goals is the real driving force behind success.

This is what that means with regard to people and business who want to make more money selling products and services locally.

Planning has been Scientifically Proven to Work

In fact, there are over 94 separate studies that have been conducted in experimental situations where researchers have come to the following conclusion: people who have explicitly stated where, when and how they are going to achieve their goals are much more likely to actually achieve those goals.

What researchers have concluded is that without a written plan that defines when, how and where action is going to be taken, then people tend to rely on willpower and motivation to get the job done.

A Written Plan is Your Guide

A written plan creates specific triggers that result in you taking specific action. In other words these trigger create if – then scenarios. If X happens then you do Y to achieve Z. The triggers can be a time, a place, an event or something else. Because the triggers are tangible and consistent, they initiate consistent action.

Here is an example of one of the studies that concludes that a written plan can double or triple your chance of success. Summarized by James Clear.

In a study published in the British Journal of Health Psychology, researchers measured how frequently people exercised over a 2–week period.

The researchers started by randomly assigning 248 adults to one of three groups.

Group 1 was the control group. They were asked to keep track of how frequently they exercised over the next two weeks. Before they left, each person was asked to read the opening three paragraphs of an unrelated novel.

Group 2 was the motivation group. They were also asked to keep track of how frequently they exercised over the next two weeks. Then, each person was asked to read a pamphlet on the benefits of exercise for reducing the risk of heart disease. Participants in Group 2 were also told, “Most young adults who have stuck to a regular exercise program have found it to be very effective in reducing their chances of developing coronary heart disease.”

The goal of these actions was to motivate Group 2 to exercise regularly.

Group 3 was the intention group. After being told to track their exercise, they also read the motivational pamphlet and got the same speech as Group 2. This was done to ensure that Group 2 and Group 3 were equally motivated.

Unlike Group 2, however, they were also asked to formulate a plan for when and where they would exercise over the following week. Specifically, each person in Group 3 was asked to explicitly state their intention to exercise by completing the following statement…

During the next week, I will partake in at least 20 minutes of vigorous exercise on [DAY] at [TIME OF DAY] at/in [PLACE]. 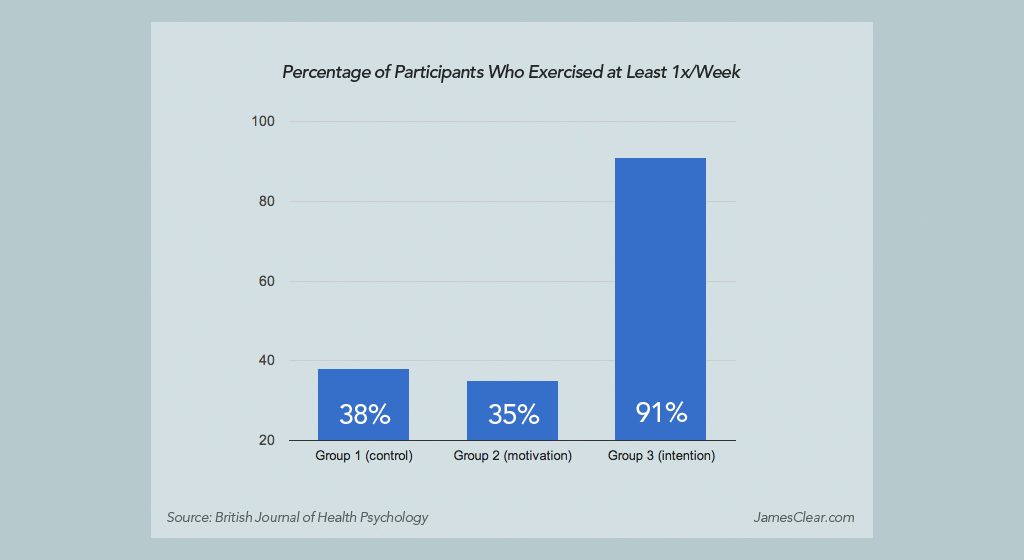 The short written statement above the chart became the written plan. The statement has specific triggers that are designed to ensure that something happens when those triggers are reached. In this case the triggers are Day, Time and Place. On the day at a specific time and at a specific place the participant is going to exercise.

As the chart indicates, far more people exercised when they had a specific plan to do so.

More Evidence of the Importance of Having a Plan

Tim surveyed thousands of his Marketing plan Pro software users. He asked the participants questions about their businesses, goals and business planning. The responses showed that those who completed business plans were nearly twice as likely to successfully grow their businesses or obtain capital as those who didn’t have a plan. 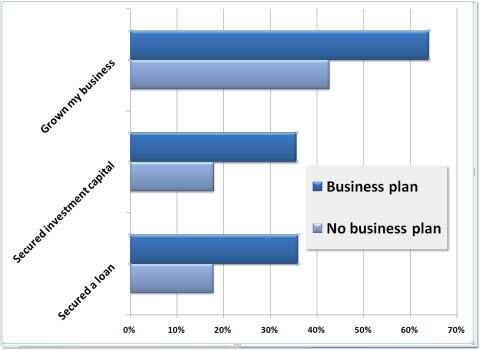 To validate the results, Tim had the University of Oregon Department of Economics assess the data. Eason Ding and Tim Hursey wrote a report on the data with the supervision of Professor Joe Stone.

What they concluded was this; “Results suggest that planning with software is highly correlated with subsequent successes for a variety of firms.”

Without a marketing plan, people and businesses selling products and services are not only less likely to achieve their goals. They’re more likely to go out of business completely.

Getting Found Online Needs to be a Priority

Nearly all costumers use the Internet is some way to shop locally. As a result any marketing plan needs to have at least one component that focuses on helping you get found online and attracting new customers.

If you found this article helpful you might also like to read one or more of the following articles:

Change Location
To find awesome listings near you!